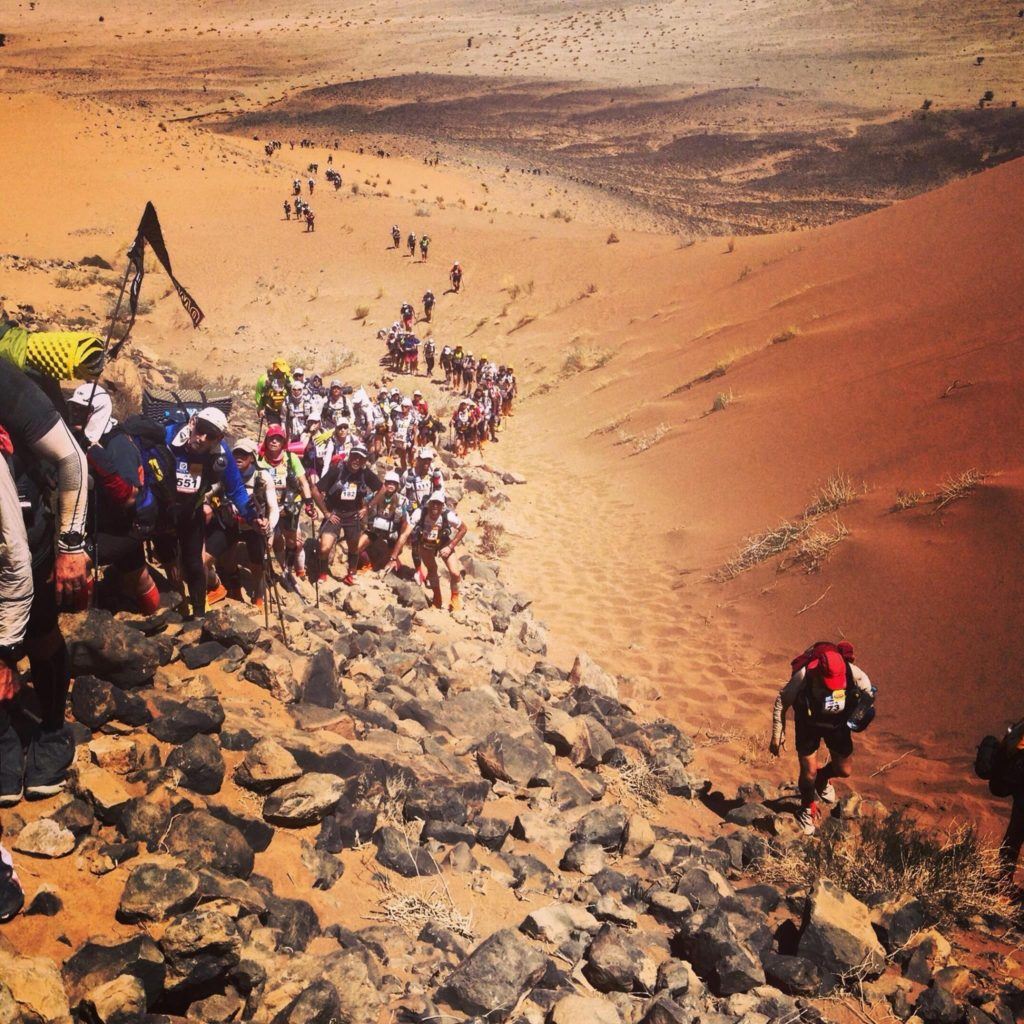 In the blistering heat and never-ending sand dunes of the Sahara Desert, the bravest, fittest souls in the world look across the vast, terrifying expanse and see only challenge and opportunity. For them, the six-day, 156-mile (251 km) annual race across the unforgiving Moroccan desert known as the Marathon des Sables (MdS) is the ultimate test of stamina and endurance, and thousands sign up every year—but only a few complete it.

You might not expect to count a British management consultant among that number, but Nisha Harish is someone who made it. Like all MdS participants, she carried with her everything she needed for survival in temperatures that can reach 134 degrees F (56.6 degrees C) in the daytime and drop to 35 degrees F (1.6 degrees C) at night—food, water, safety supplies, a sleeping bag, and medical equipment. Nisha also carried an iPhone and the Evernote app, determined to continue writing her book about her experiences while running the race. 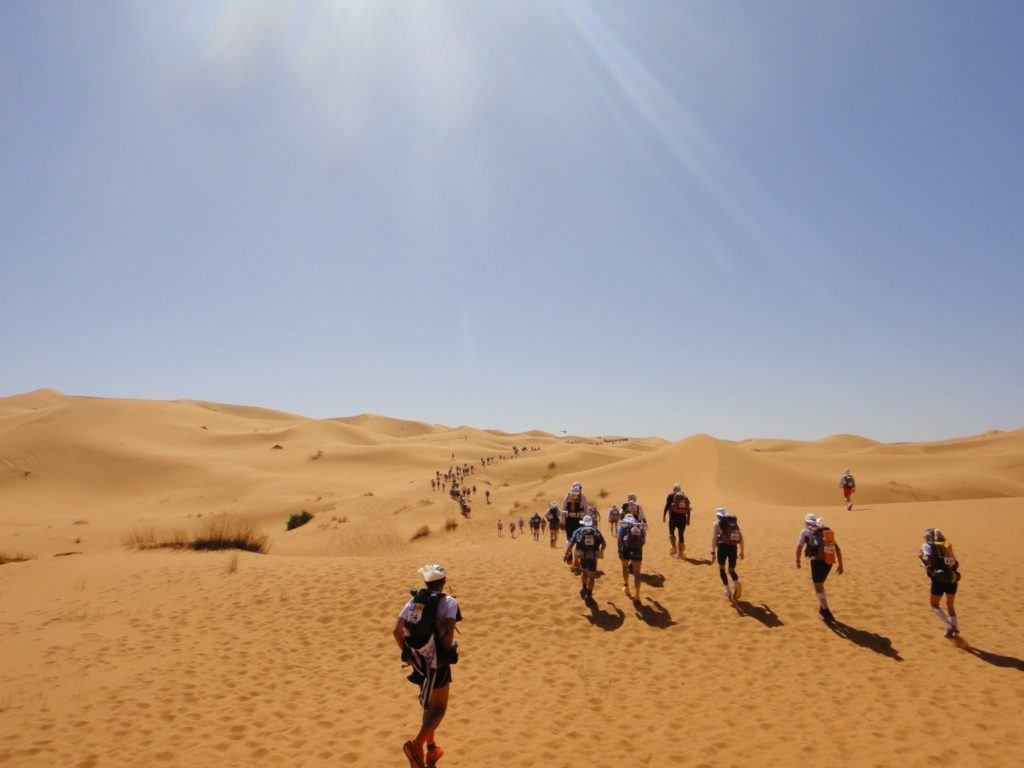 Competitors trek across the Sahara in “the toughest footrace on earth”

Grueling training for the ‘toughest footrace on earth’

Nisha was making her second attempt at the race. The first time, logistical errors cost her nine toenails. Ultimately, this meant that she was unable to complete the race. Undeterred, she came back the following year (2015), this time armed with the wisdom of experience and a backpack that was half the weight of her original. She also trained on the Dune du Pilat in Bordeaux, France, the highest sand dune in Europe. On weekends, she hiked and trained outside of London on unforgiving, hilly terrain.

Nisha said, “At the peak of my training I was running 100 miles (160 km) a week, carrying 22 pounds (10 kg) of weight on my back. All the while I was structuring my book in Evernote. I crafted the book into 12 chapters and made a notebook for each chapter. Within each notebook, I captured notes and pictures that I’d use in that chapter.”

It would be too simplistic to say that Evernote allows people to make notes because it has allowed me to achieve a major life ambition. —Nisha Harish

The race itself is even more grueling than it sounds. Runners have to be completely prepared to run the equivalent of a full marathon a day for six days in harsh desert conditions. Nisha saw fellow competitors go down with broken bones, ruptured intestines, foot infections, and even temporary blindness. Each participant must make life-changing decisions about how much weight to carry, balancing their needs against the merciless demands of the route. “The more a runner carries, the slower he or she will be,” Nisha advised. “The slower the runner, the higher the risk of missing the time limits stipulated at each checkpoint, and the longer the runner will have to spend on their feet. The more time spent on their feet, the more likely it will be to sustain an injury. All runners have to weigh the consequences versus the benefits of what we carry.”

Nisha learned this lesson the hard way in 2014, the first time she attempted the MdS. “I carried 33 pounds (15 kg) of equipment and supplies in my rucksack because I over-estimated how much I would need. The extra weight made it incredibly painful to race a full marathon every day. In 2015, I reduced this to 17.5 pounds (8 kg) which meant that I was much quicker and sustained far fewer injuries due to less pressure on my joints and feet.” 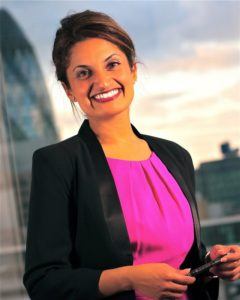 Crafting a book in Evernote

Nisha captured tips like these at night, tapping out notes in Evernote on her iPhone while in her tent. “I could capture my thoughts, feelings, and experiences in Evernote, right when they were happening, so they’d be more real than writing them later from memory. Psychologically, it felt more like texting to do it that way, more than writing a whole book,” she explained. “I knew I wanted to write the sort of book I needed to read before I ran the race for the first time. It needed to be part inspirational, and part guide; I wanted to write something to help others run the race successfully. But I didn’t like the idea of writing at my laptop in solitary confinement. I wanted to write a book, but it needed to fit into my lifestyle. Evernote gave me that flexibility.”

Nisha’s book, Big Steps, Long Strides, combines her story with practical advice, ranging from training strategies to dealing with injuries. The book includes a foreword written by the renowned explorer Sir Ranulph Fiennes, who at 71 years old in 2015, became the oldest Brit to complete the race.

Today, back at home in London, Nisha has embarked on an additional strand to her career as a keynote speaker. “When I tell people about Evernote, and I illustrate the way I used it, they’re amazed and engaged by the story—but also by the app. It would be too simplistic to say that Evernote allows people to make notes because it has allowed me to achieve a major life ambition.”