Part 4 – Planning and Executing the Migration

This is Part 4 of a 5-part series on Evernote’s transition to Google Cloud Platform (GCP). To read this series from the beginning, see Part 1.

Taking this all into account and our expected shard migration rate, we settled on the following initial plan which was communicated to users via our forum and social media:

Shard migration windows would be 09:00 to 21:00 PDT (Pacific Daylight-Savings Time) each day:

From December 16–31, we would all be on close watch. All Operations and Engineering staff would be on hand 24/7 to rapidly respond to issues and failures.

In parallel, starting December 1, we also began migrating all of the non-customer impacting services such as image recognition and our frontend traffic.

Technical Deep Dive on the Migration

When planning the migration of NoteStores, we were able to leverage prior art from our Great Shard Migration. In order to move between hardware versions in the physical datacenter, we had developed a process and scripting to move shards onto new hardware. While this was not totally reusable, it did form the core of our new cloud migration methodology detailed here.

The first thing we needed to do was to create the new shard in Google Cloud and then start the initial data sync to that new shard.

We began by creating a new notes store using Google’s deployment manager and our existing Puppet build scripts. This had the same name and configuration as the production shard but had no customer specific data yet and was not configured in our load-balancing platform.

We started the build and datasync processes about 5–10 days before the expected service cutover of a batch of shards.

We iterated as we went through this process, updating our approach:

The objectives here were to cut the service over safely and quickly in order to minimize downtime wherever possible.

In order to achieve the velocity we needed, this could not be a manual process. Once we had confirmed this process would work, we used ansible to automate the process.

During these migrations, the operations team divided into very specific roles to ensure nothing went wrong:

Project Manager – This individual coordinated the entire migration, and made decisions on items such as batch size, when to start a batch, and how to communicate progress outside the team.

Lead Engineer – This individual had complete control over migrating a batch: he determined confidence prior to starting a migration, controlled the tools to run the migration, and made all the troubleshooting decisions.

Monitoring Engineers – One or two engineers who constantly watched our monitoring systems for anything abnormal, as well as to let everyone know when monitoring indicated a migration was complete. These engineers also ran our QA tools and had final say on the success of each migration.

Fix Team – We had 2-4 engineers on hand at all times to investigate and fix any problems identified by the lead or monitoring engineers.

The UserStore migration followed the same basic steps used in the MySQL migration of NoteStore, with the major difference being the need to update the JDBC URL on all of the NoteStores to point at the new host.

As the UserStore sits in the middle of the whole Evernote service, we planned a specific one-hour maintenance window for the migration early one Sunday morning. As it is a high-transaction database that backs many transactions within our service, we ensured we had a large group of Operations and Engineering resources in the office to monitor the migration. We also had a dedicated team from Google present ready to jump in if we saw issues (they also brought in Sunday morning donuts for the team!)

This was probably the most intensive hour of the whole migration as the whole service was down and the clock was ticking.

The migration path for our other services was usually simpler as we could create the new service in parallel and gradually cutover in most instances. We were able to use some of our existing Puppet code and patterns to make the build easier but saw this as an opportunity to clean up many years of Puppet code and simplify.

So how did we do against our original plan?

Overall we were able to stick to our original plan fairly well, although we did deviate twice:

These changes were communicated via forums and social media.

Data on the shard migration

Each bubble on the diagram below represents a batch of users moved simultaneously, the bigger the bubble, the more users in the batch. The y-axis shows the number of users moved per minute, and the x-axis is simply the batch number. Each color represents a different day. 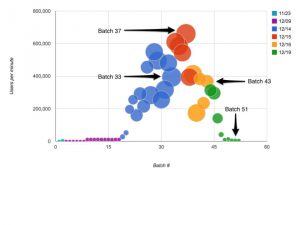 In Part 5 we discuss the Conclusion and Future.

If you have any followup questions please join us on the Evernote Forums.