Tapping Into the Daily Rituals of Our Great Creative Minds 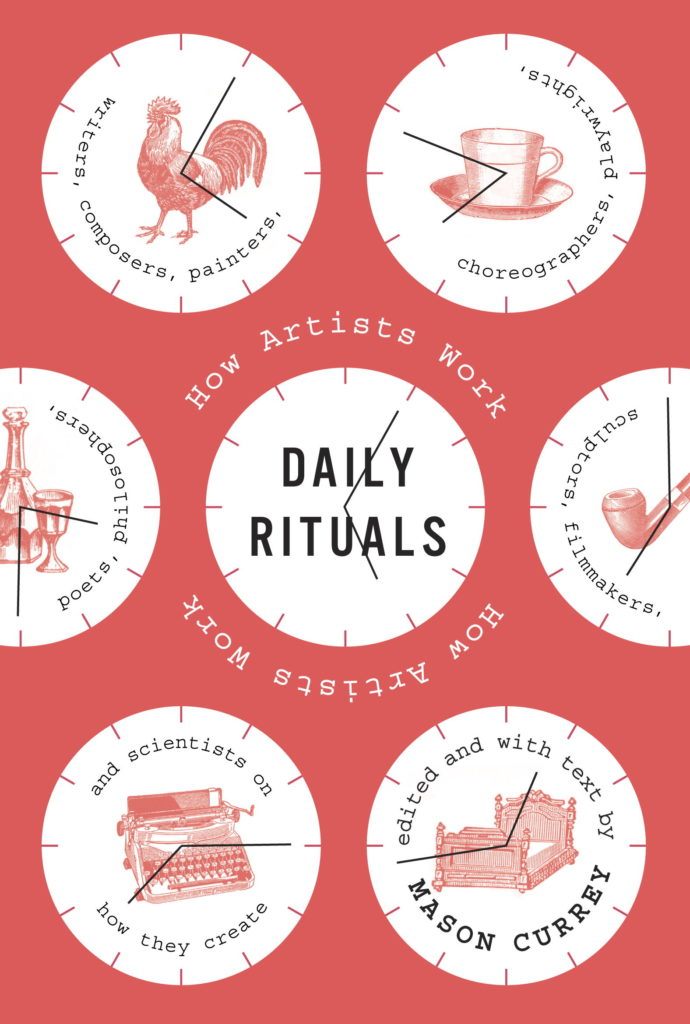 History can teach us a lot about the way we work today.

Benjamin Franklin rigorously planned and segmented his daily routine in an effort to accomplish good each day. Thomas Edison used an epic to-do list to fuel his prolific innovation and inventions. Out of superstition, Tchaikovsky took a daily two-hour walk. His return was timed precisely: not a minute early, not a minute late.

Mason Currey, author of Daily Rituals: How Artists Work, researched and profiled 161 artists, composers, philosophers, playwrights, scientists, writers, and poets. What he found can help you improve your daily work habits and keep you productive, particularly during those early morning hours.

We recently spoke with Mason about the work rituals and routines of great creative minds.

We all start each day on equal footing. Does it matter when, or how, we start those 24 hours?

It definitely matters when and how you start the day—but that doesn’t mean that there’s one “right” way to do so. In my research, I found great creative minds who woke up at 4:00 a.m. and who slept until noon (or later); who went immediately to work and who spent hours waiting for the proper mood to arrive.

What all these people have in common is that they devised a schedule and a set of habits that suited their temperaments and life circumstances—and that, in most cases, they organized their days (and, by extension, their lives) around creating the best conditions for their creative work.

Was there a particular part of the day that was most frequently the source of great productivity for these 161 creative minds you chronicled?

Early mornings are a popular working time for many writers and artists, for a few obvious reasons. If you get up early enough, you can generally count on being free from visitors, phone calls, and other interruptions. And if you go straight to work on your creative project—if you literally put it first in your day—you can guarantee that your working time won’t be derailed by other commitments or temptations.

Ben Franklin is credited with having his entire day segmented and planned. How important is it to start the morning off right? Should we all be asking ourselves, “What good shall we do today?”

Franklin’s schedule is another good example of how, I think, one’s routine should be tailored to his or her temperament. Franklin was, of course, a great believer in continual self-improvement, and his schedule very much reflects that. (It’s also worth noting that his famous daily scheme was his ideal schedule for the day, and not necessarily the one he actually followed most days.)

So I don’t think everyone should start off the morning by asking themselves what good they shall do that day—but I do think we should follow Franklin’s example of treating our daily schedule as an opportunity and a tool, and tailor it to suit our priorities in life.

Do you have tips from researching how people can embrace the morning to accomplish more earlier in the day?

I think the key is going to straight to work, with a minimum of pit stops along the way. And the more susceptible you are to distractions, the harder you have to be on yourself. Some people can read the newspaper and have breakfast with their spouse and then get to work with no problem; others have to immediately get to work before doing anything else, or else risk losing the entire workday.

I think you have to really take stock of your weaknesses and then craft a schedule that protects you from your worst habits.

The people featured in your book didn’t have the constant distractions of the web and social media within striking distance of a computer key. How can modern workers, creatives, or knowledge workers fight distraction to become more productive?

Even though most of my subjects didn’t have to contend with the Internet, many of them did have a lot of distractions in their lives—some lived in large, bustling households; others were the centers of busy literary or artistic circles; and still others had day jobs, parallel careers, or time-consuming side projects. So working in the face of constant distraction is not a new problem, even if the Internet has made it more acute. And I think the solution, then as now, is to carve out some distraction-free working time each day—to set aside a certain number of hours to work on your most important project, and then ruthlessly protect those hours.

Evernote lets people capture information, take notes, create to-do lists, and archive learnings. In a way, this is how people have been working for years. What does it say about the timelessness of the creative minds you’ve researched?

Well, as you say, these are longstanding habits that obviously have a tremendous amount of utility for many artists. And I think digital tools make it easier to capture, store, and refer back to all the various notes and to-do lists that can be an essential part of the creative process.

You differentiate between rituals and routines? Can you explain the importance of both?

I like to think of a routine as a plan or framework for each day, and a ritual as a specific behavior within that larger framework. And I think they’re both important.

Devising a daily routine forces you to prioritize your life, and a good routine ensures that you’re reserving time each day for your most important work. Rituals are a little more mysterious.

Counting out the precise number of coffee beans for your morning cup (as Beethoven did), or standing by the kitchen window and watching for the very first slivers of the sunrise (as Toni Morrison does)—things like this can help you ease into the right state of mind for creative work.

But I think each individual has to stumble into his or her own most effective rituals—you can’t just borrow Beethoven’s habits and expect a sudden influx of genius.

Is there a common bond shared by the great minds you researched?

I think the common bond is a certain degree of ruthlessness. The figures in my book put their creative work first, even when doing so was to the detriment of their relationships, their health, and their financial well-being. I’m not necessarily advising people to follow their example—I just think it’s important to keep in mind that maximizing your creative potential probably means minimizing some other aspect of your life.

Was there a specific schedule that stood out to you?

It’s hard to pick favorites. A few details that stood out to me: Tchaikovsky superstitiously taking a daily walk of precisely two hours in duration, and refusing to return home even a few minutes early, for fear of some great misfortune befalling him; Friedrich Schiller claiming that he kept a drawer full of rotting apples in his workroom, because he needed their decaying smell in order to feel the urge to write; Maya Angelou renting a “tiny, mean” hotel or motel room in order to do her writing, and surrounding herself with a dictionary, a Bible, a deck of cards, and a bottle of Sherry.

The book covers authors, writers, and creatives, but what can we learn from them to apply to the type of disciplines and professionals who don’t work in a creative setting?

I think a lot of this stuff applies to other professions. If you want to be a successful lawyer, doctor, or entrepreneur, you’re probably struggling with some of the same issues—how to pursue a time-intensive career while also being a responsible parent or spouse or friend; how to continue working on something when you’re discouraged or exhausted or uninspired; how to maximize your time and mental energy. My book doesn’t provide any concrete answers to these dilemmas, but it does show how a variety of brilliant and successful people confronted these and other obstacles on a daily basis.

What was your process for creating, researching, and writing? Did you have a specific schedule?

When I was compiling the book, I was also working a full-time job as a magazine editor, so the only way I could figure out to do both things was to get up really early in the morning. I got in the habit of waking at 5:30 a.m. every weekday and working on the book for two hours. Then I would have breakfast with my wife, take a shower, go to the office, and have a normal workday. And then a few evenings a week I would go to one of the branches of the New York Public Library to do book research. It was a grueling schedule, but it was also kind of marvelous—it’s amazing how much you can get done when you’re really busy. Nowadays I have more free time and accomplish less.

Because so many of us get lost in the noise and constant cascade of information hurtled at us from every direction, do you have advice for modern workers who want to be successful?

My advice is to figure out at what time of day you do your best work. For me, it’s early in the morning; for others, it may be late at night or in the middle of the afternoon. And then do whatever you can to arrange your schedule in order to carve out some focused working hours at that time every day (including weekends, if at all possible). This doesn’t have to be a huge block of time—many successful writers, for instance, only actually write for a couple hours a day. The key is doing it at the same time every day; there’s something magical about that repetition.