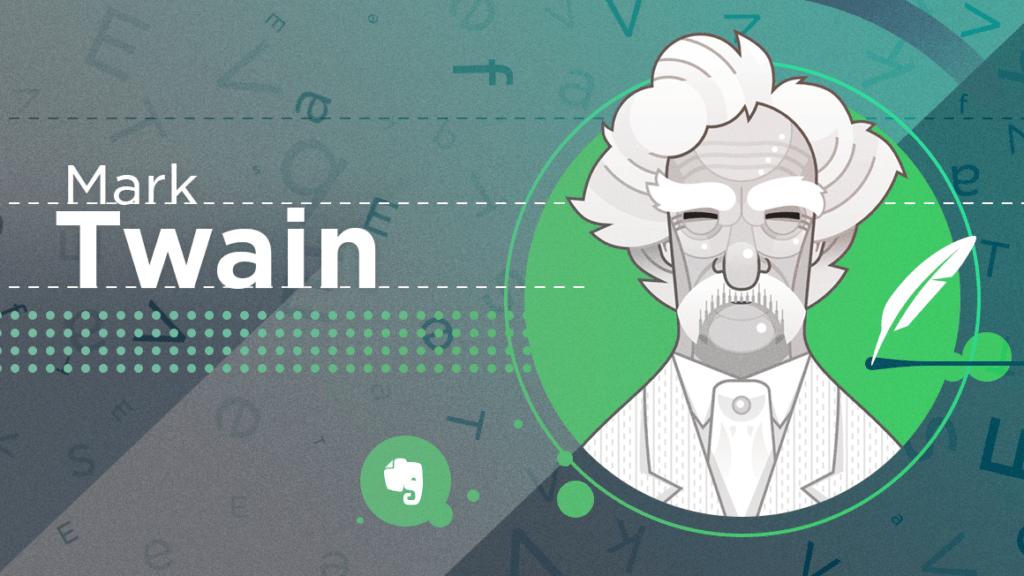 “You need not expect to get your book right the first time. Go to work and revamp or rewrite it. God only exhibits his thunder and lightning at intervals, and so they always command attention. These are God’s adjectives.” – Mark Twain, in an 1878 letter.

Samuel Langhorne Clemens was many things: a steamboat pilot, a prospector, a reporter, a world traveler, a lecturer, an investor (mostly a bad one), an inventor (with three patents; two successful, one not), a father, and, most importantly, the author known as Mark Twain.

What he was not was either particularly organized or industrious.

This is not to say he wasn’t prolific; he turned out novels, essays, plays, reviews, and letters by the score. He just wasn’t a slave to work.

Strike While the Iron Is Hot

Alex Applebaum, in a review of Bernard DeVoto’s 1942 Mark Twain at Work, noted of Twain’s working habits that

Twain worked “sporadically” depending on fits of “inspiration.” Instead of forcing himself to work for a certain amount of time, [he] relied heavily on “improvisation” and would sometimes work furiously for days; sometimes not write at all; sometimes start projects and leave them hanging for years; sometimes finish them quickly … He didn’t finish nearly as much as he started, but, nevertheless, he wrote prolifically. There are still thousands of unpublished pages and ideas he never carried through with.

What can we learn from this? To write and write and write some more—when inspiration strikes. Make note of everything. Don’t censor yourself. Even if an idea may seem useless now, it could well turn into something valuable later. Keep journals, diaries, notes, or even a blog. Even if an idea doesn’t lead anywhere on its own, it may provide the spark for something that does. The only mistake would be to not let your native creativity express itself when the time is right.

What Works Best Is What’s Right for You

While there are indeed times when we want to write or communicate your ideas with a specific goal or project in mind, don’t let not having a specific result hinder you. Twain’s approach in this regard was noted when the revised edition of his autobiography was published in 2010. Robert H. Hirst, the General Editor of the Mark Twain Project and the Curator of the Mark Twain Papers at the University of California, Berkeley, told NPR’s David Bianculli that

Twain … “hit upon the right way to do an autobiography” … What he had discovered … was the art of dictation. Instead of writing down his autobiography, Twain wanted to tell stories to another human being. And instead of telling his life story in chronological order, Twain wanted to talk about what interested him at that moment—and to allow himself to change the subject as soon as his interest flagged.

Twain dictated most of that autobiography from his bed. In 1905, he told A.E. Thomas of The New York Times:

“Whenever I’ve got some work to do I go to bed. I got into that habit some time ago when I had an attack of bronchitis… I liked it so well that I kept it up after I got well. There are a lot of advantages about it. If you’re sitting at a desk, you get excited about what you are doing, and the first thing you know… somebody comes in to attend to the fire, he interrupts you and gets you off the trail of that idea you are pursuing.So I go to bed… Work in bed is a pretty good gospel—at least for a man who’s come, like me, to the time of life when his blood is easily frosted.”

While Twain’s “working” methods may seem both antithetical to productivity and unique to him (how many of us can perform our daily tasks from a comfortable feather bed or dictate our thoughts to a handy stenographer?), there are lessons to be drawn from them. There is much to be said for allowing one’s creativity to flow freely with no inhibitions; to get something down on a page or contributed to a project. You can always develop and edit ideas, but the initial spark of creativity should never be denied. Those ideas may sit fallow for months (or even years), but they exist and you can expand upon them later when you’re ready. 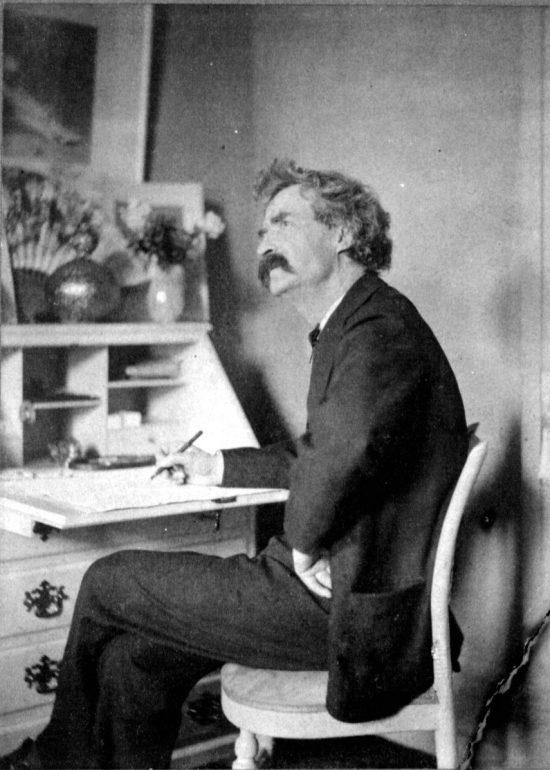 All Work and No Play …

Perhaps Twain’s disdain for traditional working methods had to do with the fact that he didn’t consider what he did to be “work.” In the same Times interview, he told Thomas that he had never done

“…a day’s work in all my life. What I have done I have done because it has been play. If it had been work I shouldn’t have done it.

Who was it who said, ‘Blessed is the man who has found his work?’ Whoever it was he had the right idea in his mind…When we talk about the great workers of the world, we really mean the great players of the world. The fellows who groan and sweat under the weary load of toil that they bear never can hope to do anything great.”

He expounded on this point in his 1889 novel, A Connecticut Yankee in King Arthur’s Court (that savagely ridiculed capitalism and the looming “Golden Age” of plutocrats) by having his surrogate protagonist say:

“Intellectual “work” is misnamed; it is a pleasure, a dissipation and its own highest reward. The poorest paid architect, engineer, general, author, sculptor, painter, lecturer, advocate, legislator, actor, preacher, singer, is constructively in heaven when he is at work; and as for the magician with the fiddle-bow in his hand who sits in the midst of a great orchestra with the ebbing and flowing tides of divine sound washing over him—why certainly, he is at work, if you wish to call it that, but lord, it’s a sarcasm just the same. The law of work does seem utterly unfair—but there it is, and nothing can change it: the higher the pay in enjoyment the worker gets out of it, the higher shall be his pay in cash, also.”

Today, so many of us get caught up in our day jobs (that can, admittedly, be drudgery) that we don’t allow ourselves to take the time to think, reflect, and enjoy the freedom of expressing ourselves and preserving our own observations and ideas. The thought of actually sitting at a keyboard—or, worse, actually putting pen to paper!—can seem like schoolwork or a chore. But how often do we get the chance to be with ourselves and commit what we really think and feel in a permanent form? Sure, coming up with a pithy tweet or a vague Facebook status is nice, but how much better to give ourselves the freedom to really dig into and examine an idea or a concept to ourselves? It’s not like anyone else has to see it or read it; the mere chance to think and write about an idea develop creative muscles that can be useful when they’re really needed for something to be expressed publically. 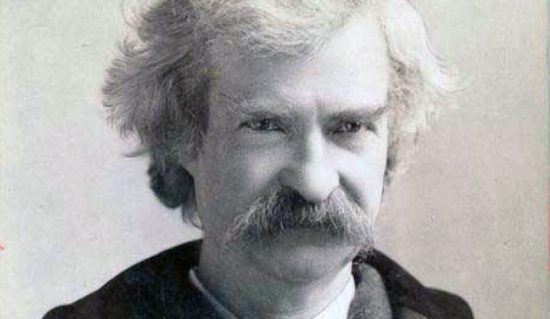 There’s No Such Thing as an Original Idea

To duplicate and use Twain’s methods would honor the man who expressed the notion that there were no original ideas; just borrowings and expansions of the work and ideas of others. In 1892, author and humanitarian Helen Keller was accused (and acquitted) of plagiarism. After reading about the case in Keller’s own autobiography, Twain was moved to write her, saying:

“Oh, dear me, how unspeakably funny and owlishly idiotic and grotesque was that “plagiarism” farce! As if there was much of anything in any human utterance, oral or written, except plagiarism! The kernel, the soul—let us go further and say the substance, the bulk, the actual and valuable material of all human utterances—is plagiarism. … It takes a thousand men to invent a telegraph, or a steam engine, or a phonograph, or a telephone or any other important thing—and the last man gets the credit and we forget the others. With this in mind, it almost behooves us to expose ourselves to as much knowledge and inspiration we can find from any source in order to synthesize it and, ironically, make it our own. Read anything you can. Write down notes and observations.”

(The edited versions of Twain’s own notebooks and journals of just his first 36 years as a writer run to more than 2,200 pages.)

Let inspiration take you to the familiar and imaginary. Travel. People-watch. Get out of your comfort zone and see things and meet people that are “strange” and unfamiliar in order to make them familiar and then share those unique insights with others. Make yourself the most interesting person in the room because you’ve been there and done that—and can express it in colorful and exciting terms. (Though two more precepts from Twain should be noted here: “As to the adjective: when in doubt, strike it out.” and “Use plain, simple language, short words, and brief sentences. That is the way to write English—it is the modern way and the best way. Stick to it; don’t let fluff and flowers and verbosity creep in.” What good are even the best observations if they get lost in the underbrush?)

In his notebook for 1902-1903, Twain may have given his most trenchant tip: “The time to begin writing an article is when you have finished it to your satisfaction. By that time, you begin to clearly and logically perceive what it is that you really want to say.” So, if you’ll excuse me, I think I need to now to start over again the beginning …