Want to Shed a Bad Habit? Know Yourself Better 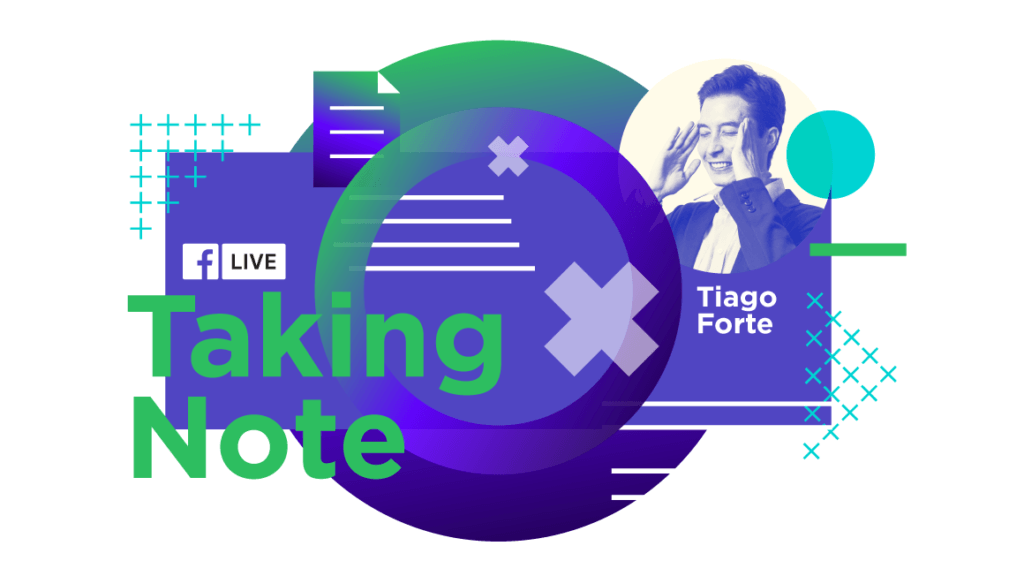 You can get rid of a bad habit and form new, positive ones through a series of scientific experiments, says Tiago Forte, a San Francisco-based productivity expert. He should know. In his quest to help others become more productive, he’s taken some hard looks at his own life and change some behaviors. If you look at your habits through a filter of data, he says, instead of through a lens of guilt and shame, changing habits can be a fascinating experience. In a recent episode of Evernote Facebook Live, Tiago opened up about changing habits through self-evaluation, how to reframe the meaning of productivity, and the importance of understanding our beverage habits.

How to Form Habits

The only way to really stay productive is by forming habits. But what steps do you need to take to change your behavior? Join us for a conversation with Tiago Forte who’ll talk about how to form new habits, what role technology plays in habit formation, and how to change your behavior once and for all.Update: Here are all the resources mentioned in this event → http://bit.ly/2hPE8K1

Tiago, whose eclectic background ranges from teaching to the Peace Corps to entrepreneurship, today owns Forte Labs San Francisco, and his mission is to transform people’s productivity. “I’m not talking about just tweaks,” Tiago says. “We take productivity to a new level.”

“The topic of behavior change is a weird, academic field that not many people know about,” Tiago explains. “But what could be more fundamental? We have behaviors that aren’t servicing us. Getting rid of them and replacing them with habits that are is behavior change. A habit is really just your own behavior, and you think you don’t have much control over it other than that you just decide to do one thing and stop doing something else. In reality, habits require some design thinking.”

In his research into habits, Tiago came to understand what he calls the habit loop, a series of cues and triggers that drive our behavior. The habit loop, which he’s divided into three parts—trigger, behavior, and reward—are components of behavior change that are all within our control, he maintains. Whether we’re looking to break a habit or form a new one, Tiago breaks down the process.

“A trigger is something that reminds you that a behavior is relevant,” he explains. “Like hunger. Your attention is drawn to the fact that you’re hungry and that prompts you to look for food. We have cues and triggers in our environment, but we don’t design them intentionally.” Tiago encourages his students to create triggers that spark a behavior, and then reward yourself when you respond appropriately to it.

In his class, Tiago asks his students to design an experiment to change a habit. “Know what it is you want to change,” he says. “Choose a behavior that you think will work. You have to think of small things that make the habit you want to develop more interesting. Can you find something in the new habit that interests you?”

He gives an example from his own life, that of washing dishes. It’s a task that he previously despised and avoided. “Then I thought, ‘I bet there’s a better way to wash dishes.’ I started looking at You Tube videos about how to wash dishes faster, how to hack dishwashing. I managed to make dishwashing a learning opportunity, and now it’s like a game. The game was the reward.”

To Tiago, the science of changing habits is simple. “In the habit loop model, there are only three stages, and you can change any of them,” he explains. “If you want to change a habit, you could make yourself aware of the trigger, and change your response to it. If the reward isn’t motivating enough, change the reward if you successfully do the behavior.”

Designing good habits is something we all want to do, but the more important (and more difficult) act is breaking bad habits. Here, the principles of human nature came in handy as he examined his own life. “I thought I drank too much coffee,” he remembers. “I said, let me go on a coffee detox for two weeks. I couldn’t do it.”

To understand why this habit was so hard to break, he started researching what made the coffee habit so strong. Breaking it down, he realized that it wasn’t the beverage itself that was at the heart of the habit, but the ancillary human needs it fulfilled.  “It was something to motivate me to work,” he says. “It was a treat. “It helped me to focus and pay attention to one thing for a long time. It suppressed my appetite. It was social; I could meet friends for coffee.”

That’s when Tiago reached his breakthrough: coffee wasn’t meeting his needs. It was the other aspects that surrounded coffee that he craved. “I could not break this habit until all of these needs were satisfied elsewhere. That’s how a bad habit can have such a good design that you think it fulfills all these needs.”

Diamonds are forever, not habits

Not every habit is meant to be a lifetime change, Tiago says, and that’s fine. Sometimes you only need to develop a habit for a certain period of time, so if you break it, the habit may have outlived its usefulness. “We walk more when the weather gets warmer,” he offers, adding, “nobody gets upset when we stop doing these walks when it gets cold.” The habit, he says, was designed for the summer only, and if you did it, it’s a success. And sometimes, he adds, habit-breaking is just an experiment. It doesn’t have to be a resolution. If you undertake a habit that isn’t working for you, stop. After all, you’re in control of the experiment.

“I read that you’re supposed to drink eight glasses of water a day,” Tiago says. “I decided to try it for 30 days. I ended up saying ‘no thanks’ to that. You end up going to the bathroom a lot. But you can’t be disappointed in yourself if you decide a habit isn’t for you. At the end of the 30 days, deciding to stop is a success.”

Take control of your habits

Tiago has learned a lot about people in his practice teaching others about habits. And he’s learned a great deal about himself, too, which has in turn helped with his teaching. One of the most important things he’s discovered is that something that works for one person may not work for another. “People are so different,” he muses. “We assume that habit changing techniques are universal, and that’s crazy. That’s why experimental habit formation is so important. When you take control over your habits, it becomes more conscious. You become better at forgiving yourself. The biggest problem with not changing your behaviors is the shame and guilt you feel when you think you’ve failed. And that,” he cautions, “is in itself a habit. The reward of shame is that you don’t have to change anything.”

The reward of shame is that you don’t have to change anything.—Tiago Forte

A proponent of a new style of measuring our behaviors called QS, or the Quantified Self, Tiago encourages people to use technology to measure things that could never be captured before. Social media helps take this data and makes us more accountable for it. “Sharing your exercise data from your Fitbit or your sleep tracker is an example,” Tiago says. “Not only are you putting your behavior change out there for the world to see, it’s a way of learning from others. Other people are working on a habit that’s different from yours, but you can still apply what they’re learning to yourself.”

QS is a movement that Tiago has embraced himself. “Sometimes I try to figure out why I feel a certain way,” he says. “There’s an app that lets you pick a color to represent your mood. Over time, it creates an animation that moves you through these colors, like a little movie of your moods. I can see if I feel different at noon, or when I’m at home, and I find and opportunities to find new habits.” He is careful, however, not to draw conclusions from his results, because the correlations aren’t always there. “If I skip breakfast one day and then go to bed late, is there really a correlation?” he asks. “Not always. Sometimes it’s best just to have the self-knowledge by itself.”

Tracking and accounting for habits is just one part of the productivity classes that Tiago teaches. After a successful series of video classes, he’s decided to teach in-person five-week “boot camps” on the full spectrum of personal knowledge management called Building a Second Brain. The boot camp explores habit creation, and also covers skills people need to process and make sense of the enormous amount of information we all work with every day. Some of the concepts he teaches in that class include centralizing notes (Tiago is an Evernote power user) to help people find information more easily, and how to break down large quantities of information using a technique he calls “progressive summarization.”

“It’s quite simple,” Tiago says. “Just highlight the most interesting part of (your notes), then (highlight) the most interesting part of that. What we’re talking about is compression. There’s no limit to how much you can compress information…if you break it into pieces, you think in terms of little micro modules you can snap together like Legos. Snap those compressions together, and something new can emerge.”

“Building a Second Brain” is a live class that Tiago offers in San Francisco, but his online courses are available through his website, Fortelabs.co. Reach Tiago on Twitter, Facebook, and YouTube. Read Tiago’s guest blog posts, Bending the Curves of Productivity, and Designing Creativity Workflows on the Evernote Blog.

Learn more about Tiago, QS, habits, and productivity, including links to all of Tiago’s podcasts with Evernote, workshops, online courses, and articles. Get all the links you need in one place. 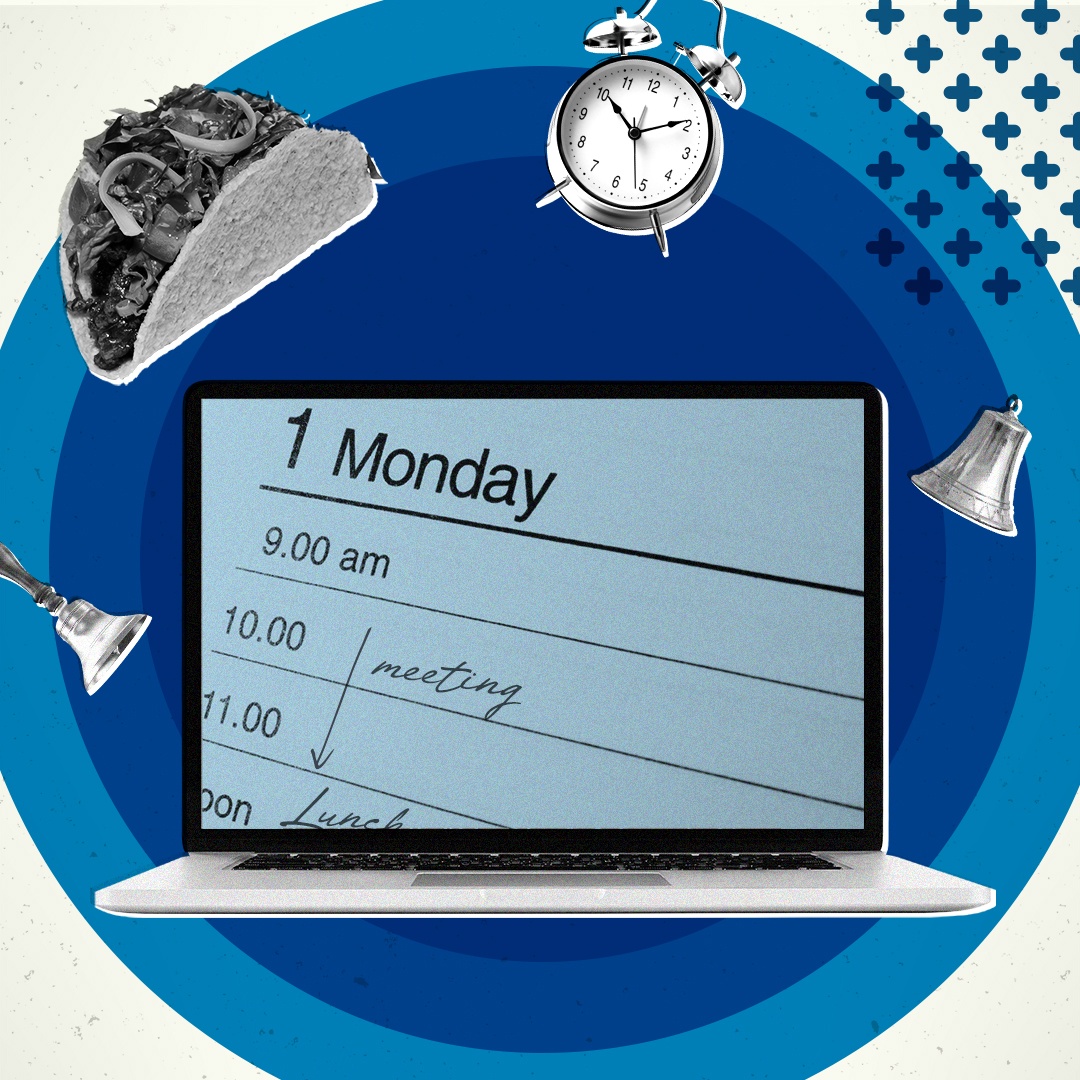 Your Digital Calendar: Home Base for Your Whole Life

Whether you're studying for exams or bouncing between meetings, a digital calendar is the most important organizational tool in your time management kit. 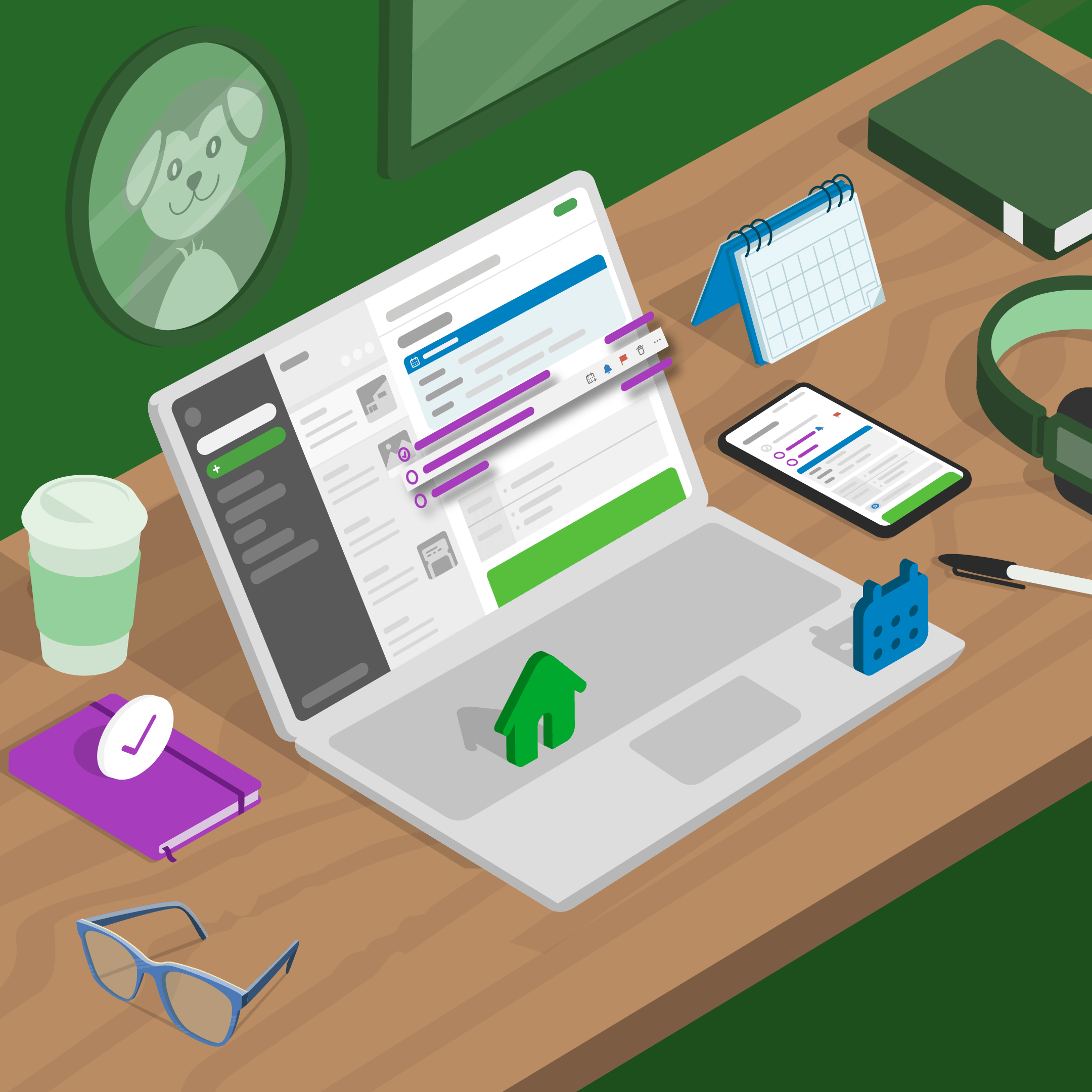 Be the Envy of the Office With Your Hybrid Work Setup

Creating a healthy hybrid work setup doesn't need to be hard. Check out our guide for tips you can use to make the most of remote work. 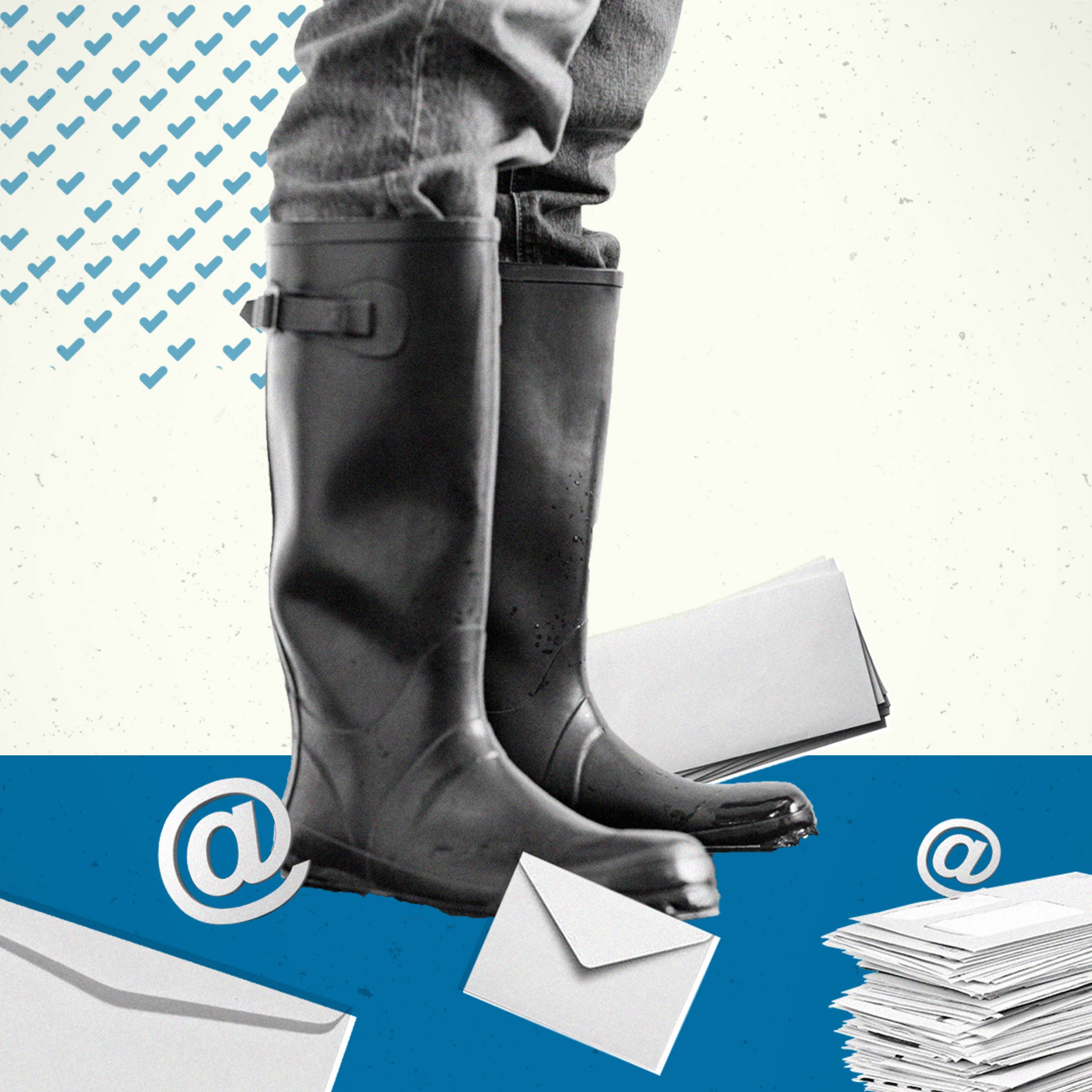 A vacation is a time for rest and relaxation, not reading emails. Here are three ideas to help you avoid a flood of messages after your next trip.